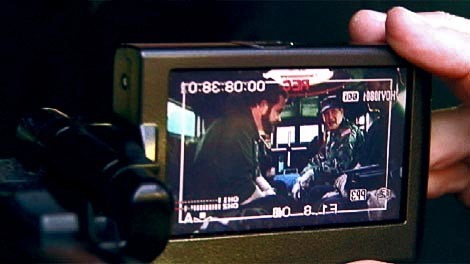 Talk of movies being made in Charleston, and people will invariable tell you about Dear John that's currently being made, or perhaps even note the recent Kevin Costner movie which what shot in Charleston.

Read more stories on this subject in our movie topic page.But lower-budget, local film production is alive and well, and a smart new action movie featuring talented actors and production staff is nearing the end of filming and about to go into post production.

"It's a little like a cross between the Bourne Identity and The Dirty Dozen", laughs Trevor Ericksonm Co-Producer of the movie "Cold Soldiers," an espionage thriller about a group of ex-special-ops soldiers, who when woken from cold storage start to cause havoc.

Made by Clandestine films, and written and directed by Nick Smith.

"It has taken longer to shoot that we expected", notes Smith. "On a Hollywood budget there are hundreds of people, whereas we're just a very small close knit local group.

"There are a lot of local talented actors and filmmakers in Charleston", says Nick "And we'd like to use local people to help us market it and dsitribute it as well once it's complete", and they're still always happy to employ the help of anyone with a passion for filmmaking to get on board.

You can catch a trailer for the film on YouTube.

Nick's already got his next movie lined up too - he's directing a vampire movie written by JC Conway that's set in Charleston, called "Holy City".

Another film Nick was involved in, "All for Liberty," is set to come out January 26. And a new Daniel Island film studio is just getting underway.

Geoff Marshall caught up with Nick at the shoot at the weekend at the Force Protection facility in Ladson.