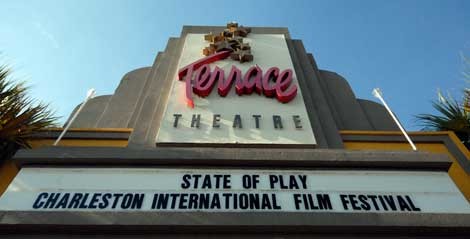 11:23 am on Friday April 24, 2009 | Posted by Ken Hawkins
The Charleston International Film Festival is here (updated)

Image by Geoff Marshall/TheDigitelImage by ciff1.jpg A short little introduction to the festival.

Update April 24: Geoff Marshall went to opening night and shares a video. Go check out our special section for what's up tonight.

Update April 23: We've just heard that Kim Delaney, from Army Wives, will be there Thursday night, as will Mark Bryan from Hootie. Director Tim Schulz will be there for the world premiere screening of Chasing the Shadows.

The Charleston International Film Festival has arrived and will run through this Sunday, April 26.

The festival offers up some 60 films from independent features, shorts, documentaries, animations -- really, all genres. As they say, "You will laugh with the comedies, feel the emotion in dramas, and definitely squirm during the horror films!"

There will also be several after parties, and filmmakers, directors, cinematographers, and screenwriters will chat with the audience during post-screening Q&A's to get an exclusive inside look into the film and industry.

You can head over to our CIFF special section for the latest coverage, highlights, schedules, and chatter about the festival straight from Twitter.

But if you're looking to get primed The Post and Courier has a good overview of the festival and we've put together a rundown of what you can expect during each block at the four-day festival.

Tickets cost $9, and all films are at the Terrace Theater at 1956 Maybank Highway on James Island.