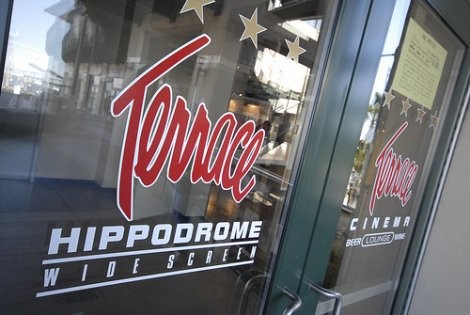 Read more stories on this subject in our movie theaters topic page.Come May of this year, the operators of Charleston's independent theater believe they will have completed their expansion into the IMAX's former home next to the S.C. Aquarium.

The name of the new theater? The Terrace Hippodrome Widescreen.

How can you not love anything with thew word "hippodrome" in it?

Here are the details from an e-mailed press release:

Terrace Cinemas Charleston announced today they have acquired a long term lease on the old Imax theater Downtown Charleston. The new theater will be called TERRACE HIPPODROME WIDE SCREEN. The new theater will boast Charleston's largest motion picture screen. The theaters format will be first run blockbusters and will have a new Wine and Beer lounge. The target date for the new Hippodrome is May 09 after renovation. The new facility will have state of the digital sound as well as Charleston's most beautiful waterfront view. Michael Furlinger and John Brieger will bring Charleston's best movie going experience to downtown as they have to James Island.

Exciting stuff. As someone who lives downtown, I can't tell you how excited I am at the prospect of no longer having to drive to catch a film. And the addition of first-run films may well fix the Charleston IMAX's Achilles Heal.

Oh, and yes, there is a new IMAX coming to West Ashley.

This report came in through a 3 a.m. e-mail, so it'll be a little bit before we can get an answer on some follow-up questions.

Update March 16, 10:30 a.m.: Got a small update, it looks like they'll have a new screen, but it will still be "the largest movie theater screen in Charleston."

Update March 16, noon: Good news on the parking front: They're doing validation, parking will effectively be $1.

Update March 17: The Post and Courier has added a full write-up with a few more details. Link.