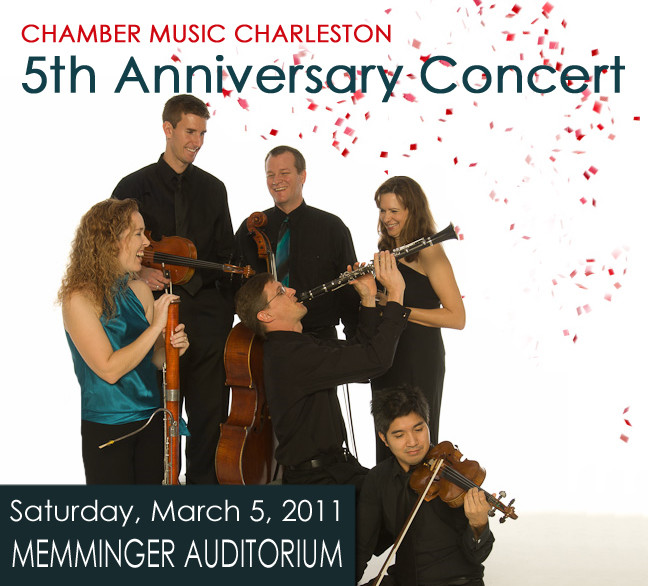 February 10, 2011 - Chamber Music Charleston (CMC) has perhaps been one of the best kept secrets in the Charleston Arts Community for the past five years.  Since spring 2006 the nonprofit organization has been sharing the excitement of live classical music with seasoned concert-goers through the intimate “House Concert” series.  These performances first began in the distinctive homes of Downtown Charleston and Kiawah.  Guests purchased their tickets well in advance – because word had quickly and quietly spread that these performance sell out months before the performance – and then arrived at the private home on the designated evening of the concert to be treated to a live performance unlike anything else they had ever experienced.  With a trio or quartet of musicians right in front of them, only a few feet away, the music could be heard and felt with an intensity and excitement that make people return again and again.  The music was performed to perfection by musicians of Chamber Music Charleston, some of the most talented professional musicians in the area.

Over the next five years CMC began sharing music with younger audiences through in-school workshops and the Classical Kids Concert Series.  Finding a lack of well-crafted children’s pieces for chamber ensemble and narrator, CMC Director Sandra Nikolajevs created a set of original musical adaptations of children’s books by Holy City author Margot Theis Raven.  These stories were set to string quartets by such major composers as Johannes Brahms, Charles Ives and William Grant Still.  One such adaptation, “Circle Unbroken,” was subsequently made into a DVD and received numerous awards including “Best Children’s Film Award” at the XXIV Black International Cinema Berlin Film Award 2009 and “Award of Excellence” at the 2009 Accolade Competition in La Jolla, California.

Larger audiences were treated to the occasional performances in art galleries and churches throughout the greater Charleston area and beyond.  Concerts of the 2010-2011 concert season take place in Downtown Charleston, Kiawah, Daniel Island, I’On, Summerville, Edisto Island, McClellanville, Florence and Beaufort.

Despite the growth of performances over the past five years, Chamber Music Charleston still remains somewhat of a secret as performances for large audiences remain far and few between.  But all of that will change on Saturday, March 5 as CMC brings its innovative and exciting programming to a large audience at Memminger Auditorium for a celebratory Fifth Anniversary Concert.  Nationally renowned guest pianist Andrew Armstrong will join five musicians of CMC in an exciting and eclectic program including John Williams’ Air and Simple Gifts, Bhorislav Martinu’s La Revue de Cuisine and Johannes Brahms’ Piano Quartet in g minor.

The Fifth Anniversary program highlights the diversity and eclecticism that CMC aims to present in all of their concerts.  While the work by Johannes Brahms presents standard piano quartet instrumentation (violin, viola, cello and piano) Martin’s La Revue de Cuisine brings together a truly varied group of musicians (violin, clarinet, trumpet, bassoon, cello and piano).  The sonorities throughout the concert will be ever changing, and the addition of special lighting and video projection will make this performance come to life in many unexpected ways.

For those who have always wanted to experience a Chamber Music Charleston concert but have been unable to get into one of the house concerts, this is a perfect opportunity to see what the organization is all about.

Tickets start as low as $5 and can be purchased online at www.ChamberMusicCharleston.org or by calling (843)763-4941.

Sandra Nikolajevs is a classically trained bassoonist who studied at the Juilliard School of Music and Paris Conservatory.  She is the Director and Founder of Chamber Music Charleston.  She resides in West Ashley with her husband, cellist Timothy O’Malley, and six year old son, Peter. ﻿