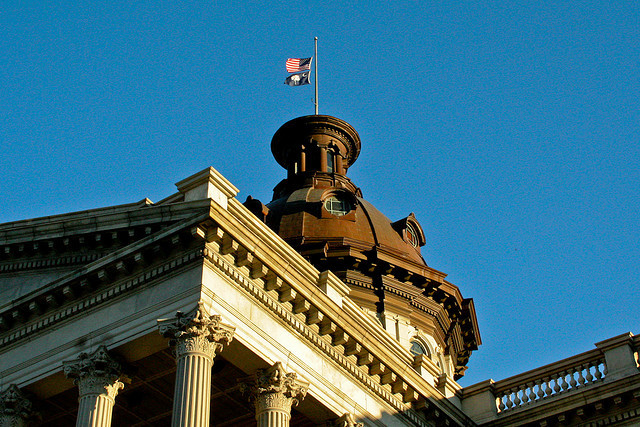 Unless you were sleeping under a rock, you probably heard that a Republican brouhaha﻿ was unfolding in South Carolina after Gov. Nikki Haley called for an "emergency" session of the Legislature to pass four bills.

(For you under-the-rock folk, read this.)

And that debate came to S.C. Supreme Court blows in a case dubbed "McConnell v. Haley﻿."

The short news of the day is that Haley lost and President Pro Tempore of the Senate Glenn F. McConnell (R, Charleston) was the victor and the Legislature will not reconvene until the date it had already set for itself, June 14.

However, that session is mainly intended to round out the state's $6 billion budget.

But the news goes much deeper, with at least three chapters being written:

1. Who's in control of the Senate

The Supreme Court opinion, while a victory today for McConnell, has some bad news for him, too.

In the 3-2 opinion, the justices appear to have given Haley a none-too-small victory in saying that a court cannot decide what is an "extraordinary occasion" and that whenever a governor sees fit, they may recall the Legislature ... but there's one big BUT in there.

The justices weighed that more important than Haley's constitutional ability to recall is a line in the S.C. Constitution that reads, "The legislative, executive, and judicial powers of the government shall be forever separate and distinct from each other, and no person or persons exercising the functions of one of said departments shall assume or discharge the duties of any other﻿."

So why does that matter? Because Haley's power allows her to call a session, and not meddle with the calendar already set by the Legislature. Since the Legislature is still technically in session (that was the bit about them coming back to finish the budget on June 14), the court said recalling the Legislature now would be meddling in the branch's internal affairs.

Thus, it's a victory today for McConnell, but only just that.

You can check out the full opinion here.

2. Chances of the bills passing

While one way or another the Legislature will reconvene, there's no guarantee that anything Haley wants passed will pass, or even be debated.

But there're two important things to note about the four bits of legislation Haley wants rounded out (which, by the way, are: creating a Department of Administration, making the secretary of education a governor-appointed position, letting the governor and lieutenant governor run on the same ticket, and consolidating the Department of Corrections﻿).

A: Although the Legislature will reconvene from June 14 to July 1, as it's a special session, getting any legislation on the roster that's not already there will require a two-thirds vote.

B: If the legislation isn't addressed then, it would still be active at the next reconvening of the Legislature as this is the first of a two-year session.

The Post and Courier﻿ has some nice coverage about the legislation and what could happen next in the Senate as well as the opinions of key folks on that legislation (folks like McConnell); read their report here.

For what it's worth, political website FitsNews.com is calling much of the legislation that Haley is currently pushing for a farce; read a post on that here.

Most unsettled out of all of this is: What does it mean for Haley's influence and, directly, her relationship with the Legislature?

After all, one thing Gov. Mark Sanford proved quite well is that if you start off butting heads too much with South Carolina's powerful Legislature, they'll quickly isolate you and make you largely irrelevant.

I could do lots of speculating here, but we'll get a good read of Haley's influence come June 14 when we'll know if the Senate will muster a two-thirds vote to get the desired legislation on the agenda, or, worse yet, if senators decide to water down any powers they were going to give to the governor.

As always, we'll keep you posted.﻿﻿