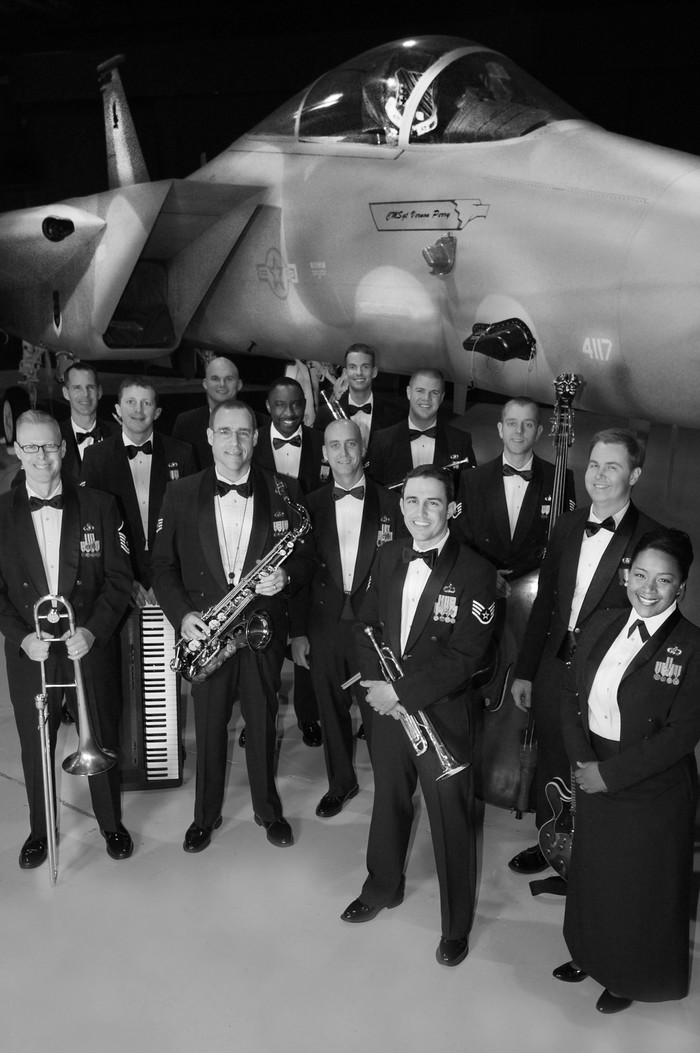 The City of North Charleston Cultural Arts Department is proud to host a free evening concert by the United States Air Force Heritage of America Rhythm in Blue Jazz Ensemble at the Sterett Hall Auditorium on the former Charleston Naval Base on Monday, February 9, at 7:00pm. The concert will feature the diverse talents of thirteen professional Airmen-musicians from Joint Base Langley-Eustis in Hampton, Virginia, whose commitment to excellence has earned worldwide acclaim and military distinction. The band incorporates a wide repertoire of jazz and fusion, from big band swing to cutting-edge contemporary music, offering a musical experience sure to be enjoyed by audiences of all ages.

Rhythm in Blue presents exciting and uplifting music to inspire patriotism and tell the Air Force story. Made up of outstanding Air Force enlisted professional musicians, the group takes great pride in preserving America's uniquely original art form, recruiting a new generation of listeners, and representing all Airmen. From formal concerts in grand auditoriums to casual shows in the park, Rhythm in Blue is in constant demand traveling throughout the Eastern United States, performing for diverse audiences from Maine to South Carolina. The high level of talent showcased by each member of Rhythm in Blue enables the group to perform with unparalleled excitement and versatility.  With their extensive repertoire highlighting instrumental and vocal soloists, Rhythm in Blue makes lasting connections with audiences of all ages.  The group honors our American military veterans for their selfless sacrifice at every performance, and shares the message of excellence, courage and commitment displayed every day by the brave men and women of the United States Air Force, serving throughout the world.

Activated in 1941, The United States Air Force Heritage of America Band and its various breakout groups have a rich history of inspiring public patriotism and enhancing esprit de corps among all the US military service branches. These world-class musicians travel throughout the Mid-Atlantic region, presenting over 300 events annually for the general public and in support of Airman morale and protocol events. The USAF Heritage of America Band remains at the forefront of communicating Air Force core values and preserving and enriching America's military and musical heritage into the 21st century. For more information, visit www.heritageofamericaband.af.mil.

For more information about this concert or other programs and services offered by the North Charleston Cultural Arts Department, call 843-740-5854, email culturalarts@northcharleston.org, or visit the Arts & Culture section of the City’s website at www.northcharleston.org.