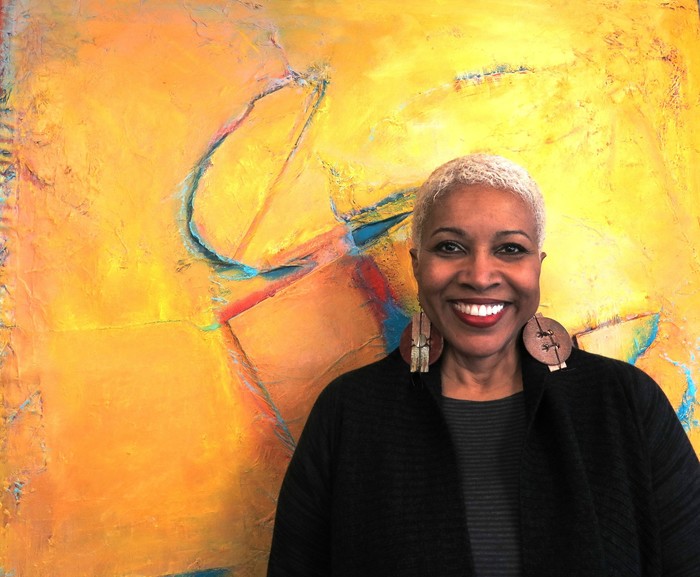 KTC’s design was selected from a total of 47 entries by artists from across the state. The selection was made by a review panel appointed by the Cultural Arts Department who judged the entries based on quality, originality, appeal to festival patrons from a broad range of backgrounds, and ability to convey the spirit of the festival as a public celebration of arts and culture.

According to KTC, Jubilee is a visual pun that explores a different approach to traditional color theory. Created with a variety of media including acrylic, oil, reclaimed Styrofoam, and paper, the abstract piece depicts an island of blue “floating and dancing” amidst a yellow sea. “The materials I use are diverse and go beyond just making marks, combining colors, or incorporating objects onto a surface,” she explains. “I am fascinated with layering and creating real or implied texture and this fascination leads me to consistently uncover new, distinct modes of expression.”

Karole Turner Campbell earned a Master of Fine Arts degree in drawing and painting from the City University of New York, a Bachelor of Science degree in Art Education from North Carolina A&T State University, and an art major diploma from the prestigious High School of Music & Art in New York City. A retired New York City principal, she now works as a full time visual artist with a passion for all things creative. Her full body of work is quite eclectic, ranging from representational to abstract, and two dimensional to three dimensional. Recently she has been creating conceptual, mixed media pieces that juxtapose antithetical ideas and materials with an objective to engage viewers in an open-ended conversation that can be ethereal and visceral, sublime and earthly, universal and specific, and spiritual and profane.

Since moving to the Lowcountry in 2006, KTC has immersed herself in the local arts community by exhibiting her works in solo shows, group shows, and galleries. She has curated two invitational group shows for the MOJA Arts Festival and served as a juror for the Avery Research Center’s national juried exhibition in 2011. In 2012, she was a featured artist at Penn Center’s Centennial Celebration Exhibition and exhibited her work in a solo show, titled Eternal Vigilantes, at the Avery Research Center in Charleston, SC, the following year. In addition, her work has been displayed in a number of venues and events throughout the state, including the City Gallery at Waterfront Park in downtown Charleston, ArtFields in Lake City, the Charleston County Library, the Charleston Artist Guild Gallery, the North Charleston City Gallery, the North Charleston Arts Festival, and the SC Palmetto Hands Juried Fine Craft Exhibition. In 2014, KTC was awarded an Honorable Mention in the oil painting category in the North Charleston Arts Festival’s Annual Judged Art Competition, second place in the MOJA Festival’s Juried Art Exhibition, and was honored for her work in the arts community at the Community Awards Luncheon.

For more information about the North Charleston Arts Festival, other competition and exhibition opportunities, or festival sponsorship and program booklet ad placement, contact the City of North Charleston Cultural Arts Department at (843)740-5854, email culturalarts@northcharleston.org, or visit NorthCharlestonArtsFest.com. Additional information about the artist can be found at www.ktcsart.com.

Head to the source at northcharlestonartsfest.com
Advertisement