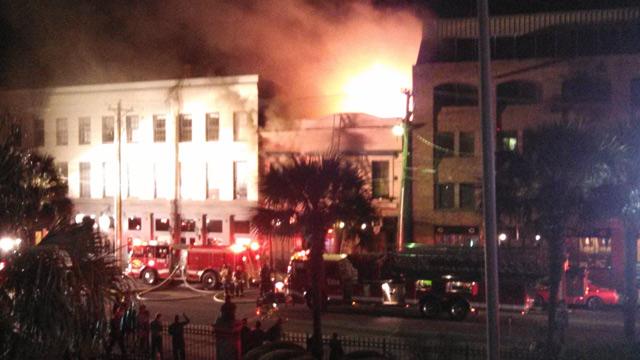 Update 6:42 a.m.: The Charleston Fire Department has sent an e-mail news release with more information on the fire and notes that East Bay Street between South Market and Cumberland streets will be closed for the next several hours.

Members of the Charleston, North Charleston, James Island, and Saint Andrews Fire Department responded to a reported commercial structure fire at approximately 1:00 AM this morning. Members from Charleston County EMS and Charleston Police Department assisted with the response. The fire occurred at 213 East Bay Street and includes the following businesses establishments: Light, Squeeze, and The Brick.

East Bay Street, between S. Market St and Cumberland St, is closed at this time due to the apparatus and hose lines in the roadway. Additionally, the structural stability of 213 East Bay Street will need to be reviewed before vehicle or foot traffic is allowed through the area. The street will likely remain closed for several hours and motorist should avoid the area during their morning commute.

First reporting, 5:35 a.m.: Flames shot from the roof of a building on East Bay Street near the U.S. Custom House in Charleston during Tuesday's early morning hours.