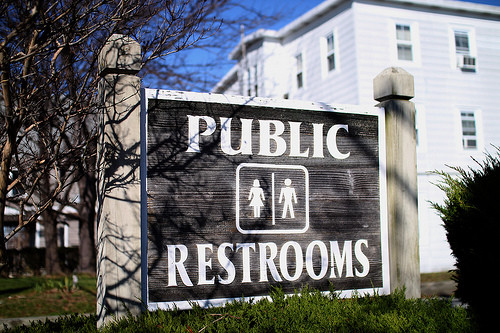 Update April 23: Ah, holding it in historic Charleston is a story that never seems to get old.

While a report by ABC News 4 mainly rehashes old points, it's notable for some remarks by Mayor Joe Riley that city has little interest in putting bathrooms South of Broad as "below broad street it's a residential area, it's not a commercial area." That strikes me as a simplistic view of the situation, given the massive draw of the Battery and White Point Garden, and that these are public spaces where private companies cannot fill the service void.

And, yes, we did just earlier this week post a map of where you can find Charleston bathrooms and the forbidden no-potty zone.

Update December 5, down the drain: Four months later and the city's "Toilet Task Force" is nearly ready to distribute informational cards on bathroom locations but still can't find a way to place a public restroom south of Broad Street.

First reporting, August 1: More consistent hours, better signs, map cards, and more are among the ideas being floated as to how the CIty of Charleston should handle the problems of too few and too hard to find public bathrooms.

Read about the latest developments at The Post and Courier.

Still there seems to be little pushing on getting bathrooms in the south of Broad Street into the tourist heavy Battery area. To me that would seem to be the biggest need as there's few businesses to be persuaded to allow you to use their facilities.

Get the back story about this issue on our bathroom topic page.