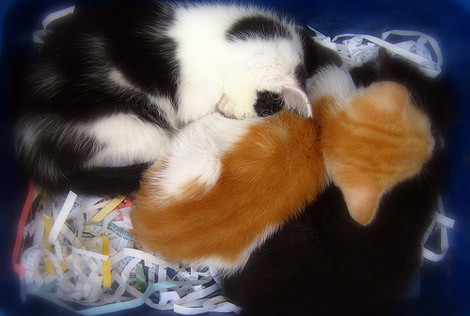 Image by flickr user eva101Image by 20080701kittens.jpg Looking for a new friend? Try the Charleston Animal Society's shelter. They've got plenty of kittens and puppies looking for a home.

The Charleston Animal Society has seen a big jump in residents lately, bringing in 50 to 100 a day while only 10 or so are being adopted out. The summer tends to bring that trend, though, according to animal society officials, not to mention sicker animals because of the heat.

On Saturday, 17 cats and kittens were relinquished by a resident of Clayton Avenue in West Ashley. That put Saturday's intake to 58.

All 17 felines had to be euthanized, Oldham said, because they suffered severe respiratory infections, malnutrition, dehydration and parasites. Their gums were white from blood-sucking fleas and hookworms. Some kittens, gasping for air, were dying as they were brought in, she said.

No action is planned against the owner, said Kay Hyman, director of outreach and communications. The owner was overwhelmed when the cats continued reproducing, (Veterinarian Kristi) Oldham said.

But what the animal society is saying is this: Spay or neuter your pets!

And if you're interesting in adopting a pet from the Charleston Animal Society, visit their Web site or call 843-747-4849 for more information. The society is located at 2455 Remount Road in North Charleston: