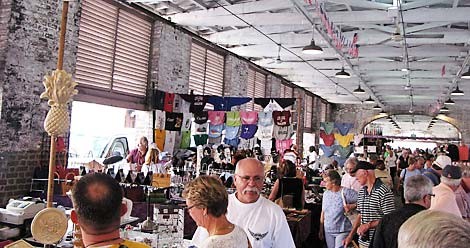 4:45 am on Wednesday October 1, 2008 | Posted by Ken Hawkins
City Market to get bigger and better

Image by Flickr user Smudge 9000Image by 20090923farmersmarket.jpg Whether or not all the vendors will last is not known, but everyone wants the tourists to stay.

Updates are at the bottom.

Big changes look like they're coming to the City Market. Management is being transfered to the City Market Preservation Trust, who will help the city undergo some $8 million in expansions, upgrades, changes, and an all-around cleanup.

No doubt the nick-nack vendors will be there for a long time to come, but one of the principals of the new management group is Hank Holliday, who has become known as a bit of a historic-development guru.

Sounds great. And I'd love it if the market could actually offer a little bit more for us locals, which seems like it could be coming as plans call for the space to be used for nighttime events. I'm honestly a little surprised that we aren't using the Market and the street for some sort of Christmas day festival/shopping event or something.

Included in the plans is to fix up the existing buildings and surrounding space and to, eventually, build a fifth building near the Waterfront Park on the porting of Market Street currently used as a surface parking lot.

On Monday, the city voted to support the first $4 million of those changes, with the money for the new building coming at a later date.

Update October 1: Live 5 News reports that among the changes is a change to how vendors get booths at the market. It used to be that it was purely a matter of who had been there the longest, but now other factors are at play like how unique and where their goods come from.

Understandably, many vendors are concerned they'll be getting the bump.