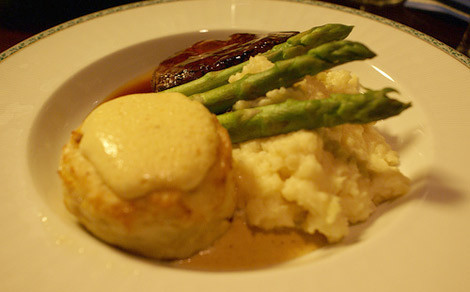 Image by flickr user SklathillImage by 20080701crabcakes.jpg This crab cake is being served in Baltimore, but the crab that it's made out of might be from closer to home ...

When Chesapeake Bay crabs aren't available, where do Maryland restaurants turn to maintain supplies? Often, it's your very own Lowcountry crabs. And it's happening more and more as harvesting increases and more environmental issues pop up in the Mid-Atlantic, causing authorities in Maryland and Virginia to impose stricter limits on crabbers.

To get around the supply problem, one Maryland crab distributor and restaurateur recently opened a wholesale shop in Georgetown County, prompting rumors to circulate that Chesapeake Bay crabbers were invading South Carolina waters.

That supplier, John Crockett of Skip Jacks Seafood in Salisbury on Maryland's Eastern Shore, says he's not out to start any crab wars, he just wants to secure a source of crabs and save money on transportation.

He says he and other Maryland and Virginia crab suppliers have purchased crabs from South Carolina and virtually every other Southern coastal state for years to maintain a steady supply of crabs in the Chesapeake market.

And, according to the state Dept. of Natural Resources, Maryland is the destination for a hefty chunk of South Carolina's crabs, even though the past few years have seen a decline in crabbing here, as The Post and Courier continues:

George Steele, of State Department of Natural Resources Fisheries Statistics Section, said the catch is off from 2004 when South Carolina crabbers hauled in nearly 4.7 million pounds of blue crabs. Just why it's down, no one knows: It could be a smaller number of crabs out there, or a drop in effort by crabbers, Steele said.

Regardless, a substantial portion of South Carolina's commercial catch goes to Maryland, where, Steele said, "they don't like to talk about it too much, I'm sure."

And if you're thinking about doing any crabbing of your own here in South Carolina, here's the DNR's regulations for the 2008-09 fiscal year.