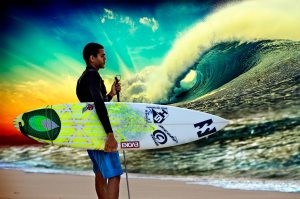 I am an avid movie watcher. I'm not a film critic or an aficionado, I just love to go to the movies. It stems from my youth, my brother & I love to take my Dad to action films. If something blows up, he's in heaven.

Friday we (Katie & I) went to see a film that didn't exactly go BOOM, but I was still blown away. I am a sucker for inspirational quotes, motivational sayings, and above all else, stories of triumph. Derek Rabelo has a story that is all of that and more. He left me in awe of what someone can accomplish when they set their mind to it.

Derek Rabelo was born blind in Brazil in 1992. He has never been able to see the water, but it's always been part of his life. His father owned a surf shop and by the time Derek was a teenager, he was ready to start taking on the ocean.

His story was picked up by a number of people that were inspired by his determination, lack of fear, and love for surfing. The film documents Derek's journey from Brazil to California to Hawaii in search of his ultimate goal: To catch a barrel at Pipeline.

If you can't tell, I thoroughly enjoyed this movie and I would recommend it to anyone, whether you surf or not. Beyond Sight is the name of the film. If you are in Charleston, we saw it at The Terrace Theatre on James Island.

Head to the source at pickadirection.com
Advertisement