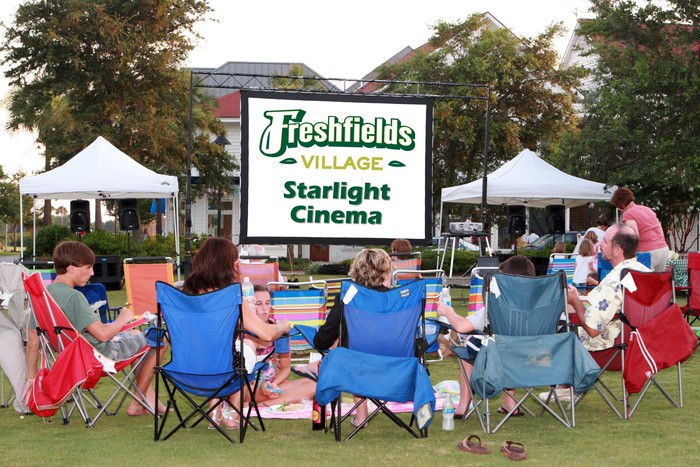 Partake in a double-entendre of amusement by watching a blockbuster hit while enjoying the celestial beauty of a Lowcountry evening on the village green at FreshFields Village during the Starlight Cinema Series. This free, outdoor event will begin on May 29, and will take place every Wednesday at 8:30 p.m. all summer long, through August 28, 2013, and will feature a selection of family-friendly films.

Scheduled movies for the month of July include:

Mirror Mirror – July 3 – A wicked enchantress schemes and scrambles for control of a spirited orphan’s throne and the attention of a charming prince. When Snow White’s beauty wins the heart of the prince that she desperately pursues, the Queen banishes her to the forest, where a ravening man-eating beast hungrily awaits. Rescued by a band of diminutive highway robbers, Snow White grows into an indomitable young woman determined to take back her realm from the treacherous Queen. With the support of her subjects, she roars into action in an epic battle that blends spectacle, magic and contemporary humor in Singh’s signature, jaw dropping visual style. (PG; 106 minutes; 2012)

The Natural – July 10 – A beautifully filmed movie about baseball as myth. Roy Hobbs (Robert Redford), a young man whose gift for baseball sets him apart, finds that trouble dogs him, particularly when it comes to women. In time, as an aging rookie, Roy must fight against his past to lead his team to the World Series and win the woman of his dreams.  (PG; 134 minutes; 1984)

Dolphin Tale – July 17 – Based on true events, this family film is about Winter, a young dolphin who lost her tail in a crab trap, and Sawyer, the introverted 11-year-old boy who befriends her. Sawyer meets the rescued dolphin at the Clearwater Marine Aquarium, a marine rehabilitation center where she lives. Sawyer rallies friends and family alike to save Winter by convincing a pioneering doctor to create a unique prosthetic appendage to restore the dolphin's ability to swim. (PG; 119 minutes; 2012)

Brave – July 24 – This film follows the heroic journey of Merida, a skilled archer and headstrong daughter of King Fergus and Queen Elinor. Determined to carve her own path in life, Merida defies an age-old custom sacred to the unruly and uproarious lords of the land. Merida's actions inadvertently unleash chaos and fury in the kingdom, and when she turns to an eccentric Witch for help, she is granted an ill-fated wish. The ensuing peril forces Merida to harness all of her skills and resources – including her clever and mischievous triplet brothers – to undo a beastly curse before it’s too late, discovering the meaning of true bravery. (PG; 100 minutes; 2012)

Big Miracle – July 31 – Set in Cold War-era 1988, Big Miracle tells the true story of a small-town news reporter and a Greenpeace volunteer who enlist the help of rival superpowers to save three majestic gray whales trapped under the ice of the Arctic Circle. (PG; 114 minutes; 2011)

Food and beverages will be available for purchase. Guests are encouraged to bring a beach chair or blanket.

Head to the source at freshfieldsvillage.com

Good
I really liked this,Many Skills used as well. I Love it.