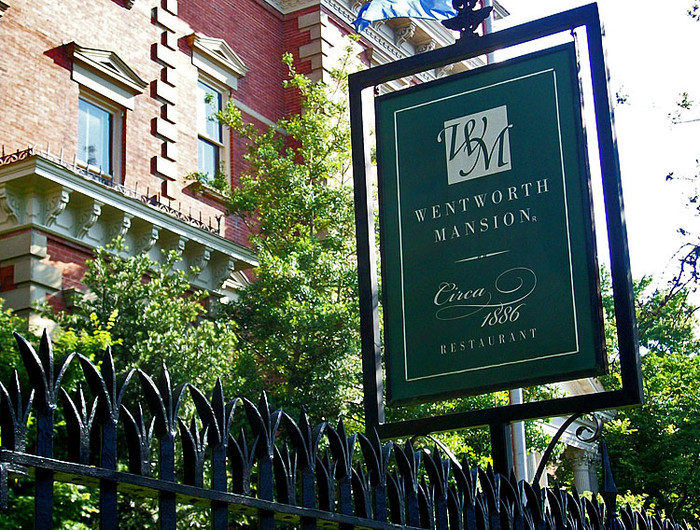 Sometimes it seems like the amount of love restaurants in Charleston receive is directly related to their proximity to the Market.

The further the tourists have to walk, the less likely the establishment is to get recognition it deserves. Now, I'm not saying Circa 1886 doesn't get any respect -- that's certainly not the case, but I have noticed that it very rarely creeps into the "favorite Charleston restaurants" lists of local residents. I'm not sure if that is simply because not enough people have given it a chance or what, but I definitely think that needs to change.

Circa 1886:
149 Wentworth Street
Monday-Saturday from 5:30 to 9:30 p.m.
(843) 853-7828Located in the heart of Harleston Village, directly behind the Wentworth Mansion, Circa 1886 offers one of the most swanky, upscale dining experiences in the city. The atmosphere isn't particularly romantic, but everything about the space screams "high class." If you are trying to secure a more romantic setting, be sure to request one of Circa's booths, which are set off in their own individual alcoves and lend a greater sense of privacy.

Like all great restaurants, Circa's staff is exceptionally knowledgeable about its menu. However, the thoroughness of our server's knowledge was particularly impressive given that the restaurant debuted its new, seasonal menu just a week before our meal. Circa's menu is small, yet diverse, offering a variety of traditional Lowcountry flavors and ingredients. Prices fall in line with Charleston's other high-end establishments, with appetizers ranging from $10-16, salad course options $9-12, entrees $20-30, and desserts $10-12.

To start, we couldn't resist the 24-Hour Pork Belly ($11), because -- come on -- how do you expect me to say no to any meat that's been slow cooked for a whole day? The pork belly was accompanied by Tupelo honey, Valencia orange slaw, and some delicious baked beans prepared with a mustard sauce. If they host barbecues in heaven, I'm pretty sure this dish would make the menu.

Next, we went with a Tomato Carpaccio Salad ($10). This dish combined slices of heirloom tomatoes, crispy fried green tomatoes, Clemson blue cheese, thin slivers of Bermuda onions, and a basil vinaigrette. If you're not familiar with Clemson blue cheese, it has a big, sharp, tangy flavor that will blow that bottle of Hidden Valley in your fridge right out of the water. The plate had a nice balance, as the light, fresh flavors of the tomato, onion, and vinaigrette perfectly contrast the richness of the cheese.

For my entree, I went with the one permanent fixture on Chef Marc Collins menu, his trademark Antelope Loin ($30). Our server explained that Collins was introduced to antelope during his time in San Antonio and managed to convince his distributor to keep supplying it to him when he moved on to Charleston. The meat was tender -- not gamey at all -- and cooked to a perfect medium rare. The loin was served over a creamy Anson Mills grits sauce, topped with a roast tomato and merlot fondue, and served alongside a mildly spicy ragu of corn and leeks. I think antelope may have become my new favorite non-beef red meat.

My partner decided to go the seafood route, ordering the Wild American Salmon ($24). This may have been Circa's only miss of the evening. As a whole, the dish was acceptable, but the salmon was simply way too salty. The fish was accompanied by diced pineapple, goat cheese, and a Vidalia onion sauce. The one way that the salmon became enjoyable was when it was combined in the same bite as the pineapple, which counteracted the salt with its citrusy sweetness. The plate also featured a spring roll filled with Carolina Gold rice and roasted red pepper. Circa's take on the spring roll was tasty, but it seemed a bit out of place.

For dessert, we initially had our hearts set on the intriguing Wild Strawberry Float with house made soda, Tahitian vanilla bean ice cream, brown butter cake, Grand Marnier, and cookies ($10), but had to alter our plans when we were informed that they ran out of one of the key ingredients. We instead selected our server's recommendation, the Blueberries and Cream Souffle ($12).

The souffle itself was delicious, but the item that generated the most conversation of anything that night was the "honeysuckle" ice cream that was served in a little poppy seed lace cup next to it. The flavor was unbelievable. My partner, who spent a lot of time on Sullivan's Island growing up, was instantly transported back to the days of her youth spent squeezing the tiny drops of sweet nectar out of the ubiquitous flowers. While I didn't have that same experience growing up (and have never even eaten honeysuckle straight from the plant), I could not believe how perfectly the flavor of the ice cream matched the scent that I know so well. We couldn't convince our server to tell us what the secret ingredient was, but I'm holding out hope that Chef Collins eventually sells his recipe to Ben & Jerry's.

Overall, our meal at Circa 1886 was a resounding success. The atmosphere is wonderful, the service was fantastic, and almost everything we ate was excellent. While Sean Brock, Mike Lata, and Bob Waggoner may get the lion's share of the press in Charleston, Marc Collins is quietly leading a kitchen that's putting out as good of food as you'll find anywhere in the city. If you're somehow flush with cash these days, take a chance and wander behind the Wentworth Mansion for a memorable dinner. I promise your money will be well spent.

David Heiser is a recent graduate of the College of Charleston, where he served as the restaurant and film critic for the George Street Observer. He will soon be moving to Chicago where he will serve as the Midwest Brand and Food intern at Ketchum, a leading global public relations firm.

You can read more of David's reviews on his Web site.