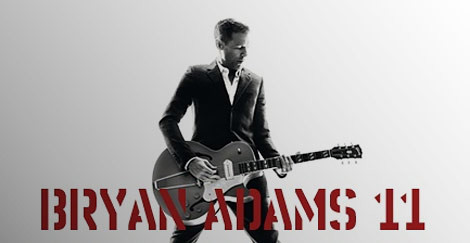 Bryan AdamsIf you're a fan, Adams will be signing copies of the new album at 5 p.m. at the new Mount Pleasant Wal-Mart (map).

You can hear the new album on his Web site.

The New York Daily News seems to have liked his new album well enough, saying:
After a couple of disappointing albums, Adams has produced a well-crafted CD called '11,' a collection of 11 new tracks on his 11th studio album that he is performing in 11 cities this summer.

With "11," which is being sold under a deal with Wal-Mart and Sam's Club, the singer returns to his roots. "This album is about searching for something," he says, although for what exactly not even the artist seems to know for sure. Despite some ordinary love songs such as "Tonight We Have the Stars" and "I Thought I'd Seen Everything," the album has some bite to it.

Adams performs Monday (July 21) at 8 p.m. at the Charleston Music Hall downtown. Tickets cost $40 and are available at Etix.

Since 1978, Adams has released 14 albums that sold more than 65 million copies.