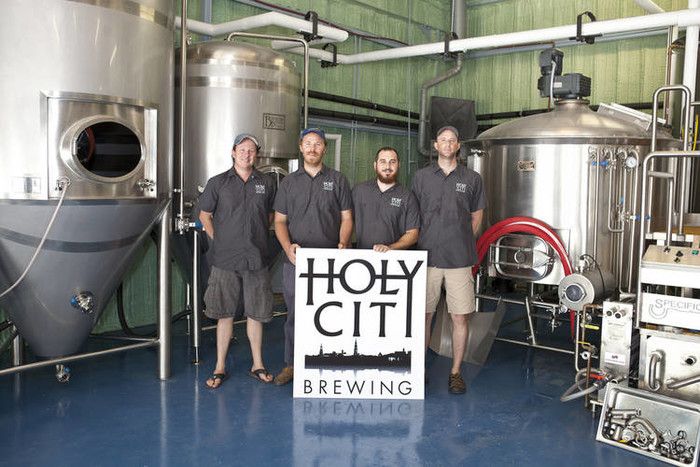 Update: As of Monday, September 26th, the tasting room at Holy City Brewing is officially open for business!

Update August 19: Good ol' Ballard with the City Paper has followed up with Holy City Brewing with a profile on their launch and what took them so dang long to get going.

Take a read over here.

As always, stay tunned to our beer topic page for more news about local brews and follow Holy City Brewing's news on Facebook.

Holy City is the four-man brewing brigade of Chris Brown, Joel Carl, Mac Minaudo, and Sean Nemitz. The four met over time after Chris moved here from Atlanta, Joel and Sean were running a pedi-cab company downtown, and Mac immigrated from Asheville. They all shared a passion for homebrewing and a DIY mentality, which culminated into their converted-warehouse brewery off of Dorchester Road.

Thursday's debut will feature two offerings. Pluff Mud Porter will be one of their year-rounds, the other a yet-to-be-brewed Czech Pilsner. The porter is a delightfully smooth affair, trading in the dry finish of many other porters for a full-bodied, creamy mouthfeel throughout. The second HCB tap will feature the first in their Fish Bowl series, a showcase for experiments mainly in the pale ale and IPA spectrum. This one is an awesome-sounding IPA made entirely with Summit hops, a high alpha-acid (highly bitter) varietal that is sure to get the hop-heads all...hopped up.

Oak Barrel Tavern is (a killer beer bar cast from the mold of Folly Beach Brewing) located at 825B Savannah Highway. They are on The Book of Faces, and the Twitter, as is Holy City here and here (respectively). There will be some happy-hour-esque specials on Holy City pints, and otherwise general revelry. See you beersfolk there.