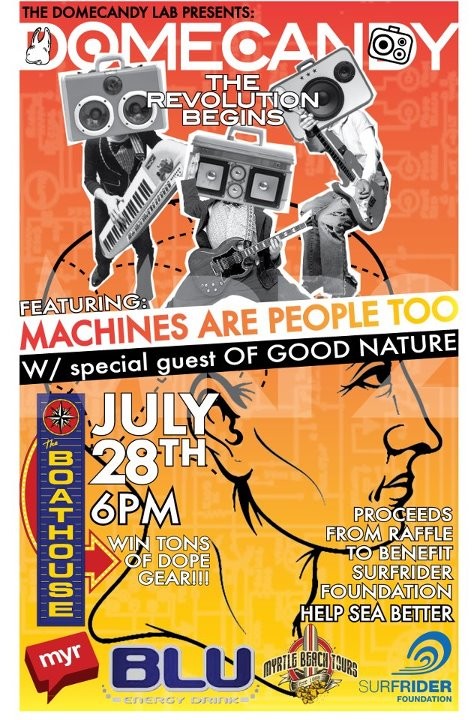 10:59 am on Wednesday July 11, 2012 | Posted by
DomeCandy Lab to host Music and Art Exhibition at The Boathouse in Myrtle Beach

In its first sponsored concert event, North Myrtle Beach-based creative electronics company DomeCandy Lab is set to promote a show at the Boathouse in Myrtle Beach on Saturday, July 28, 2012 with Chattanooga’s own Machines Are People Too headlining the event.

The Exhibition, in which proceeds will be donated to the Surfrider Foundation, was a brainchild of DomeCandy’s founding partners Seth Alcorace and Bob Williams dubbed “The Revolution Begins”. The event will host a number of creative talents, both local and regional, from sponsors to presenters, in hopes to bring awareness to both their brand and a foundation in which the company solely appreciates and believes in. It's all an effort to help build the creative culture in Myrtle Beach.

Founded in 2011, DomeCandy gives life to vintage suitcases by reconstructing them into sound systems, inserting speakers into the cases making them into a portable boomboxes.  “We have the ability to change the way the world perceives the boombox,” says co-founding Williams.  “We were created out of necessity.  We needed portable music that sounded good and a product that lasted.  That combination doesn’t seem to exist in the electronics market.  Whether we realize it or not, nobody has a boombox they got when they were six.”

Alcorace, the other half of DomeCandy, admits that in today’s electronics market the composition of the boombox just doesn’t have much of an enduring shelf life.  “A big problem we see today is our throw away society.” he says.  “Most products out there aren't built to be repaired. When something breaks, we throw it away and buy a new one. In designing the boombox we set out to help change that. All of our products are not only built using recycled materials but are designed to be easily fixable, giving them an indefinite life cycle.”

As for the art and music exhibition, DomeCandy doesn’t want to just showcase their innovation but bring an up-and-coming band that has yet to be introduced to the Grand Strand with Machines Are People Too, which was featured at the 2012 Bonnaroo Festival as well as the 2012 Hangout Music Festival.

“I found that this was not just an incredible band but found, as a company, we could relate to them,” says Alcorace.  “Each boombox we make is unique with its own whimsical back-story, developing it into character.  With the band’s unique and creative sound, I knew booking them was a must.  The first time that I heard them I was hooked.”

Bringing the Surfrider Foundation into play only seemed right to DomeCandy as they didn’t want the focus of the concert to just be about the company and the music, but to give to an organization that they believe in. “At DomeCandy, creating social impact in our community is something we strive for,“ says Alcorace.  “We wanted to make that evident in choosing to involve the Surfrider Foundation and their much needed effort to restore the ocean to its natural state as well as my love and passion for the outdoors.”

Attendees will not only have a chance to see incredible bands with Machines Are People Too and Charlotte’s own Of Good Nature who is opening the show, but DomeCandy is sponsoring a raffle to win items such as a boombox, artwork by Shnaz and all sorts of other sweet gear.  They will also be giving a 20% discount to anyone who wishes to purchase a boombox on the day of the show.

The show is set to begin at 6 p.m., concluding at 10 p.m. and is free.  The DomeCandy raffle is $5 per ticket and can be purchased on-site at the Boathouse that evening.  For more information about the event, call the DomeCandy hotline at (888) 587-0822 or Email Us.