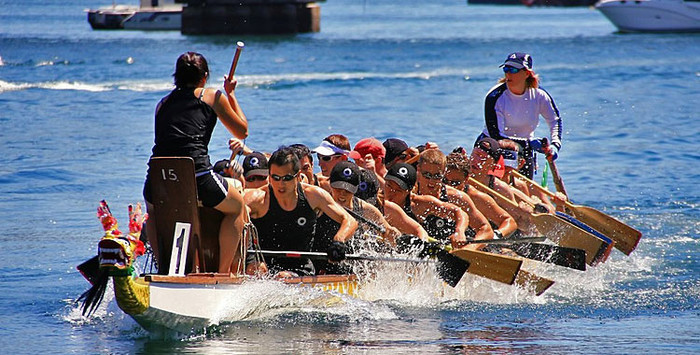 6:27 am on Sunday May 3, 2009 | Posted by Ken Hawkins
Charleston's Dragon Boat festival returns (updated with images)

Update May 3: The Post and Courier shares a swell photo gallery. Go check it out.

Update May 2: David AvRutick snapped a number of pictures with his camera phone while he was there, and was kind enough to let us share them and his captions with you. Folbots on the water at the Dragon boat races. Must be a tall dragon boat coming thru. Championship race is coming up. The Vikings are favored. The dragon boat paddled by Vikings won the championship. A Folbot nose to nose with a dragon... no fear here. There was quite a crowd at the Dragon Boat Festival. Dragon boat heading out for battle...

Come watch crews of 20 race 41-foot dragon boats on the Ashley River at the Dragon Boat Charleston 2009 Festival on Saturday, May 2nd.

The festival is at Brittlebank Park and runs from 8:30 a.m. to 5 p.m. Free admission.

Here's a bit about the festival from an e-mailed release:

The sport of dragon boating involves 20 paddlers sitting two per row in a 48 foot wooden boat adorned with a dragon head and tail. The boat is powered by the grit and determination of the seated paddlers. A coxman pounds out the stroke rate on a drum mounted in the front as the boat battles to stay on course with the help of a steers person working a long oar mounted in the stern of the boat.

This colorful ancient Chinese sport is expected to draw over 3000 spectators to Brittlebank Park for the day-long event which begins at 8:30am. The open registration call drew in over 45 new and returning teams. Dragon boat teams from Charlotte and Atlanta are also traveling to Charleston for the festival.

The day's activities include cultural performances by the Charleston Chinese Association and a Lion Dance by Master Studios. Kids will find inflatable fun to keep them happy between races which are schedule to occur every five minutes on the 250 meter course in front of Brittlebank Park.

The festival supports the Roper St. Francis Cancer Center and other cancer and wellness programs of Dragon Boat Charleston.