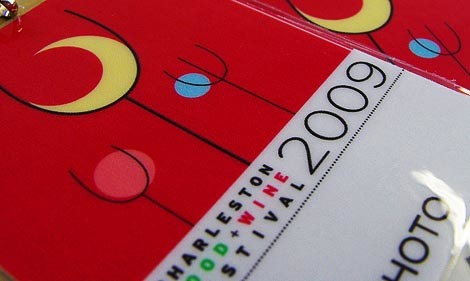 Read more stories on this subject in our Food + Wine Festival special section.Charlie Magazine writes that Thursday's Opening Night Party went great, and shares a slew of photos from the event.

And then, on Friday morning, the opening ceremonies came. It was pretty much your standard fare, and News 2's Larry Collins was on the scene and Tweeting away.

Shortly after that Bobby Flay made his appearance and Nick Boshen won the drawing for a chance to cook with food star.

Friday finally drew to a close with the "Restaurant Dine-Around," where local and non-local chefs performed at area restaurants, including Sean Brock and Wylie Dufresne at McCrady's. -- The Charleston City Paper's foodie Stephanie Barna is currently bringing Twitter updates from that event.

Here at TheDigitel we'll continue to bring you roundups and our own coverage throughout the festival. But to fill in the gaps I suggest heading here -- that link connects you to posts on Twitter with the Food + Wine marking, #ChsFnW.

And now we're headed into Saturday, the biggest day of the festival with nearly two dozen official events.

If you haven't already made plans, tickets are still available to the Culinary Village + Grand Tasting Tent and the Pinot Envy event in Mount Pleasant.

But, as always, there's unofficial events, too. One of those is the "Locals First Block Party" by Ted's Butcherblock. And with "live local music, craft beer on tap, rotisserie lamb from the SC Upstate Farmers Alliance ... " I'm earnestly excited.