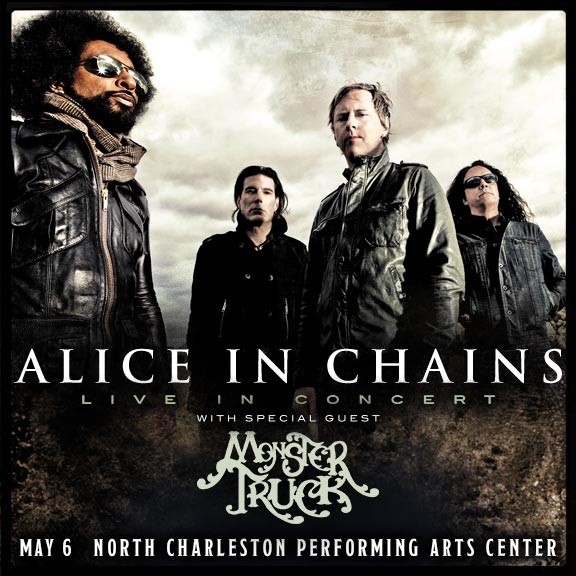 Alice in Chains have announced dates for a U.S. tour that launches April 25 in Tulsa, OK before making its way to North Charleston on Tuesday, May 6. Pre-sale tickets will be available beginning Wednesday, Jan. 29 at AliceinChains.com, while public on-sale date is this Friday, January 31.

Before they embark on the American tour, Alice in Chains travel to Australia for several Soundwave Festival shows. They’ll also play their first ever show in Singapore at the Singapore Rock Festival on March 6.

After the U.S. tour, they’ll play several European festivals this summer. Some of those gigs will be with Metallica, including Rock in Roma (Rome, Italy), Aerodrome (Prague, Czech Republic) and Krieau Rocks (Vienna, Austria).

Known best for ’90s alt-rock hits such as “Rooster,” “Man in the Box” and “Would”, Alice in Chains are touring in support of their 2013 album ‘The Devil Put Dinosaurs Here,’ which debuted at No. 2 on the Billboard 200 album chart when it was released in May. It has also spawned two No. 1 singles: ‘Hollow’ and ‘Stone’ and topped Loudwire’s list of the 10 Best Rock Albums of 2013

Head to the source at aliceinchains.com
Advertisement