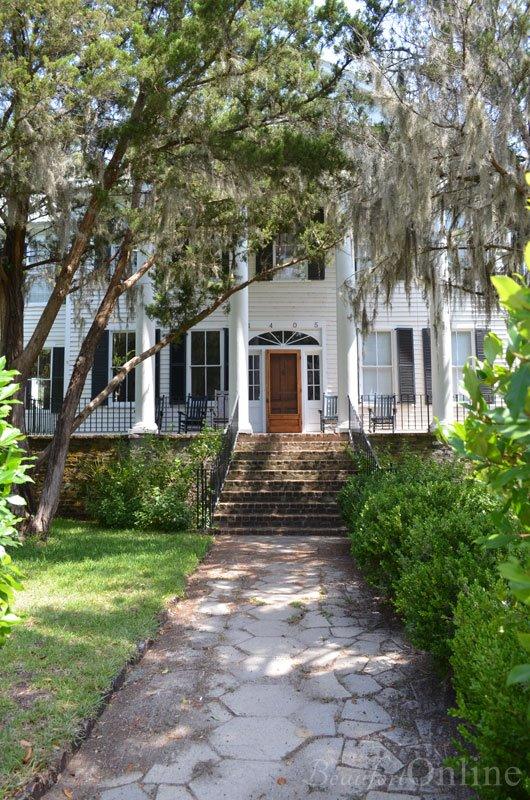 During the Civil War, Union soldiers set up a signal station on the roof of Edward Barnwell’s house. It is located on the bluff of Bay Street- the perfect vantage point for the soldiers to make communications through the passageway of Port Royal Sound to the Atlantic Ocean. Edward Barnwell was the grandson of Col. John Barnwell “Tuscarora Jack,” an Indian fighter and one of the founders of Beaufort. Edward did evacuate from Beaufort during the “Grand Ske-daddle,” fearing the invading northern soldiers.

A historian from Charleston pulled old nails from the house and declared it to be no older than 1815. During the 1800’s, two brothers that lived here build a wall through the middle of the house to divide it because they could not tolerate each other’s company. Today, you can still see the nail holes along the floor. In 1920, the house was owned by Broadway actress Maude Odell Doremus and later purchased by the McTeer family in 1937. James McTeer, “high sheriff of the lowcountry” immersed himself in Gullah culture and was known as a white witch doctor. Edith Bannister Dowling and Grafton Geddes “G.G.” Dowling Jr., bought the house in 1959 and started a family with three children: David, Grafton Geddes Dowling III and Elizabeth. Right across the street is marsh and pluff mud- so Edith had her drawing room couch covered in colorful naugahyde “since her three children liked to come in from hard play in the yard or rivers and crash on the couch. She was a wonderful mom, ” writes her son, Geddes Dowling.

Edith Bannister Dowling covered this couch with naugahyde in case the children spent the day playing on the bluff.

Edith Bannister Dowling (1915-2004) received degrees in literature from Oxford University and taught at USCB for twelve years in the 1960s-70s. Living here inspired Edith’s poem called “This Old House,” in which she writes about the mysteries surrounding the home: “Some are facts, some are handed-down stories; some, children-aimed myths.” She was sitting at a desk from 1676 that a relative shipped to her from England, describing how the thirteen paintings in the room are always found tilted by an unseen entity, no matter how many times she straightened them. Here is an excerpt:

I swear, as I wrote that, I heard two cedars’ sorrowful sighs.

And I am alone here – alone, with all owners, who grew

To be ghosts, in this house. All their families watch, from beams,

Hand-carved pegs; from the staircase, the friezes, each door

They are wondering, laughing, perhaps, about those who just now

Inhabit these rooms: what our reason, our purpose, is for.

The breezes come into the room unobstructed with these long jib windows.

Where you could once walk outside through the jib windows, porches have been removed.

Geddes has done some work on the house, but left parts exposed as he plans to highlight the history instead of covering it over. When drywall was removed in the kitchen, the original horsehair plaster and lath, fireplaces, cupboards, an old boot and even a “secret” passageway were discovered! Glass will probably be installed inside the cupboard space to preserve and exhibit original building materials. The antique couch shows its years, but it has no stains thanks to its naugahyde upholstery. A mirror in the drawing room is tilted, facing the couch, allowing for a perfectly reflected view of the bay through the front windows. Jib windows in the room are standing open, where many are permanently sealed shut in Beaufort houses. These windows have doors below the glass which allowed access to the porches and opened fully for the breezes. Unfortunately, the porches were removed outside, so walking through the windows would quickly deposit you on the ground today.

We thank the Historic Beaufort Foundation and Geddes Dowling for presenting the Edward Barnwell House this year for the Fall Festival of Houses and Gardens 2012. For more information about Edith Bannister Dowling, please visithttp://staugustine.com/stories/010205/obi_obit20074128.shtml and http://www.lowcountrynewspapers.net/archive/node/196177. You can find a copy of her book, A Patchwork of Poems, at the Beaufort County Library.

Head to the source at beaufortonline.com